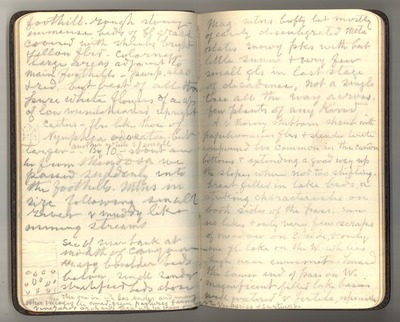 foothills. Rough stony immense beds of glacial gravel, covered with shrubs, with bright yellow flowers, covering large areas, adjacent to the main foothills. Many of the plants have purple flowers and red, but best of all are the pure white flowers of a low roundheaded upright species of cactus. The flowers look like those of Nymphia Odorata but larger. Another smaller species also has white flowers. In little more than an hour after leaving Mendoza we suddenly entered the foothills of the great Range, mountains in size, following a small river, muddy like a mining stream. A section of the river bank at the mouth of a canyon showed very rough beds at the base, containing large boulders and sand and light gravel on the upper half. Pretty regularly stratified. Magnificent mountains, lofty, but mostly rapidly disintegrating metamorphic slate. Snowy peaks, with but little snow, and very few small glaciers in last stage of decadence. Not a single tree was seen all the way up to the summit and down the other side into the town of Los Andes. A small, thorny, stubborn shrub with papilonaceus flowers and slender terete compound leaves, common in the canyon bottoms, and in some cases ascending up the slopes where the material is not too shifting to allow it to strike root. In the Pass there are a great many filled-up lake basins, a striking characteristic on both flanks of the Range. Saw only one glacier lake near the summit and only a very few scraps of meadow on east side. The glacier lake was on the west side near the summit. Toward the lower end of the Pass on the west side there is a magnificent lake basin well watered and very fertile. Especially the one in which Los Andes and several other villages lie amid green pastures, farms, vineyards, orchards, through which we pass on our way to Valpairaiso and Santiago.