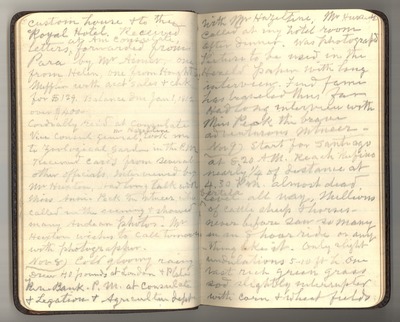 Customs House and to the Royal Hotel. Received letters at the American Consulate which had been forwarded from Para by Mr. Aimer. One from Helen, one from Houghton Mifflin with Acc. Sales and check. Cordially received at the Consultate, by Mr. Bartelman, Consul. The Vice-Consul General, Mr. Halzentine, took me to the Zoological Gardens in the afternoon. Received cards from several other officials. Interviewed by Mr. Huxton for one of the newspapers. Had long talk withMiss Annie Peck, the mountaineer, who called in the evening and showed many Andean photographs. Mr. Huxton wishes to call tomorrow with a photographer to get a picture to accompany his newspaper article. Nov. 8. Cold, gloomy rainy day. Drew forty pounds at Londing & Plate River Bank. In the afternoon went to the Consulate, the Legation, and Agricultural Department with Mr. Hazeltine. Mr. Huxton called at my hotel after dinner, with a photographer, and obtained the pictures he desired for the Herald newspaper, so my fame has traveled thus far, though I am not acquainted with a single person in the whole of this great town. Nov. 9. Start for Santiago at 8:20 A.M. Reach Rufino, nearly a fourth of the distance, at 4:30 P.M. The whole plain an almost dead fertile level soil all the way. Millions of cattle, sheep and horses. Never before saw so many in so short a ride, or anything like it. Only slight undulations, five or ten feet high, are visible. One vast, rich, green, grass sod, slightly interrupted with corn and wheat fields, and alfalfa fields,