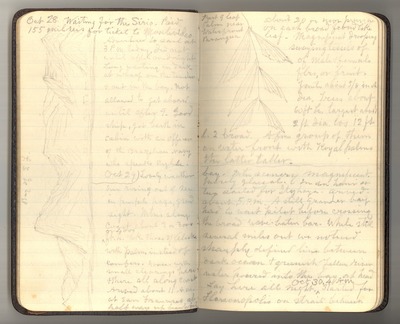 October 28. Waiting for the Sirio. Purchased a ticket to Montevideo for 155 Milreis. Steamer was advertised to sail at 3:00 P.M. today, but did not sail until after midnight. Long waiting in the dark at wharf and out in the Bay on the tender. Not allowed to get aboard until after nine o’clock. Good little ship. Got a berth in a cabin with a handsome young officer of the Brazilian Navy who speaks English. October 29. Charming weather. Sun rising over the sea in purple haze. Grand sight. Mountains along the coast about 2000 or 3000 or 4000 feet high, like those of Alaska in form and sculpture, with palms instead of conifers. Houses with small clearings here and there all along the coast. Arrived about 11:00 A.M. at San Francisco, about half way up a beautiful bay. Mountain scenery magnificent. Purely glacial. In an hour or two left San Francisco, about half way up a beautiful day. Mountain scenery magnificent. Purely glacial. In an hour or two left San Francisco for the port of Ityhaya. Arrived about 5:00 P.M. This is a still grander bay than the one we hav left. Had to wait for a pilot before crossing the broad wave-beaten bar. While still several miles out we noticed a sharply defined line between the ocean and the greenish-yellow river water, poured into the bay at its head. We lay here all night. Around Paranaguay in gardens and in a small park there are many species of palms. One in particular, the traveler’s tree, shaped like one immense fan. Another, with beautiful triangular leaflets on its broad frond-like leaves, and magnificent drooping swaying tassels of male and female flowers or fruit. Fruit about five eighths of an inch in diameter. Trees about sixty feet high. The largest about two feet in diameter of trunk. Leaves twelve feet long and two feet broad. A few of these are on the water front growing with Royal palms, the later much taller. October 30. Started for Florionopolis at 4:00 A.M. It is situated on a narrow strait between