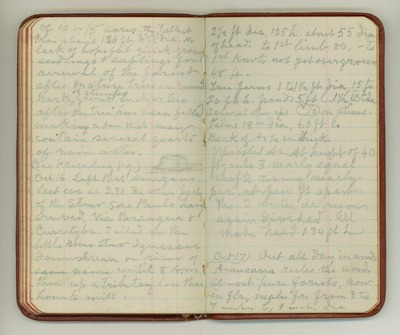 of ten or fifteen acres back of the house. The tallest of the trees are about one hundred and twenty feet high, and between two and three feet in diameter. There is no lack of helpful quick-growing seedlings and saplings for the renewal of the forest after those trees are removed. Bark of the stumps grow an inch or two after the tree has felled, making a shallow pan of the top of the stump that may contain several quarts of rain water. October 16. Left Port Amazon last evening at 2:30 on the little river steamer Iguassu. Sailed down stream on the river of the same name until 8:00 A.M. this morning. Then up a tributary, less than an hour’s sail, to the mill. October 17. Out all day in the woods. Nearly all the trees are Araucarias, forming almost pure forest. They are now in flower. Male flowers from three to seven inches long, one inch in diameter. Female flowers about two inches in diameter. One specimen tree that I carefully measured was about two and a half feet in diameter four feet above the ground, one hundred and twenty-five feet high, and the crown was about fifty-five feet in diameter. The first limb was at a height of about eighty feet. Some of the knots of the limbs that had fallen off toward the head of the clear part of the trunk were not yet overgrown by the wood rings. A good many tree ferns are growing in the moister parts of the woods, from one to one and half feet in diameter of trunk, and fifteen to twenty feet high. Fronds five feet long one and a half to two feet wide. Several other species of ferns were growing on their trunks. There are also a good many palms in the woods, with trunks eighteen inches in diameter and sixty feet high. The bark of Araucarias usually about half an inch thick, and towards the top peels off in thin sheets, something like birch bark. But it is always much thicker towards the base of the tree and forms a good defense from grass fires. On some of the older trees the bark is two or three inches in thickness nearly to the top. I found a tree that had been blown down by the wind which, at a height of forty feet from the ground, was divided into three nearly equal shafts, which ascended nearly parallel to each other only a few feet apart. The two outer divisions again divided, and all together united in a head one hundred and thirty feet high. I found fine clumps of cane, thirty feet high. Very slender, growing on stream banks. This cane, though common, covering nearly all the ground on thousands of acres, only along the streams are any living ones to be found; said to die naturally at the age of seven years. Lumbermen complain of the trouble the dense growth gives them.