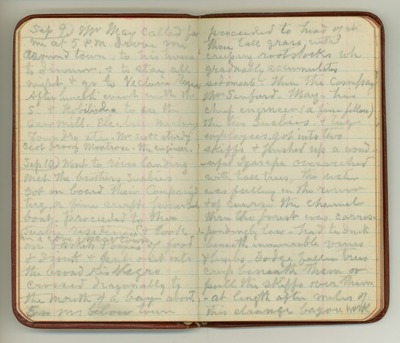 September 9, 1911. Mr. May called for me at 5:00 P.M. and drove me around town, then to his home to dine and stay all night and go see Victora Regia next day. After lunch went with Mr. Sanford and Mr. Robardia to see a sawmill, the electric machinery for supplying the city, the foundry, etc. Mr. Scott, a sturdy Scotchman from Montrose, was the engineer. September 10, 1911. Went to the river landing, met the two brothers Suabi, got on board their steam tug, a fine swift boat, proceeded to their fine residence in a cove near town, and took on baskets and boxes of food and drink, and steamed out into the broad Rio Negro. Crossed diagonally to the mouth of the bay, about five miles below the town. Proceeded to its head through tall reedy grass which had creeping root-stalks which gradually accumulates sediment. Then the company, Mr. Sanford, Col. May, his chief engineer, a fine fellow, the two Suabis, and tug employees got into two skiffs and pushed up a wonderful Igarape over-arched with tall leafy trees. The water of the river has been falling rapidly during the last few days and of course the channel through the woods was correspondingly low. We had to duck beneath innumerable ropey lianes and tree branches, dodge the fallen trees, creep beneath them, or pull the skiffs over the tops of them. At length, after miles of this strange Igarape work,