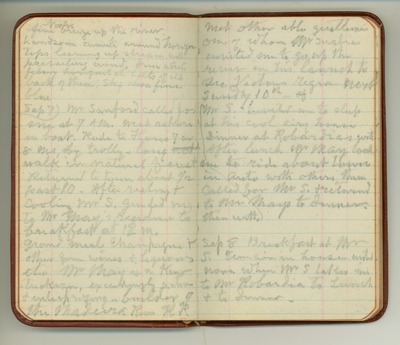 Fine noon breeze coming off the river. Handsome cumuli around the horizon, their head leaning upstream, with the prevailing wind. Dim, white, filmy horizontal belts of clouds back of them. Sky above, fine blue. September 7, 1911. Mr. Sanford called for me at seven o’clock this morning. Went ashore with him and rode to the suburb called the Flores, seven or eight miles by trolley, and thence enjoyed a long walk by a narrow path in the natural forest. Returned to town about half past ten. After resting and cooling, Mr. Sanford guided me to Col. May’s residence to breakfast at noon. A grand meal. Champagne and other fine wines, liquors, etc. The Colonel is a Kentuckian, exceedingly active and enterprising. He is the builder of the Madeira River railroad. Met other able gentlemen, one of whom, Mr. Suabie, invited me to go up the river in his launch into a lagoon to see Victoria Regia next Sunday, the 10th. Dinner at Robardias, Agent for the Booth Company. After breakfast Col. May took me to ride about town in his auto. Then called for Mr. Sanford and returned to May’s to dinner. Mr. Sanford invited me to sleep at his cool, airy house. It is perfectly wonderful to me how kind people are to this stranger. September 8, 1911. Breakfast at Mr. Sanford’s. Remained in the house until noon, when Mr. S took me to Mr. Robardia’s to lunch and also to dinner.