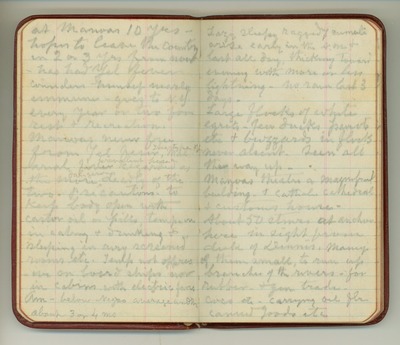 living on the Amazon at Para and Manoas for some ten years. He hopes to leave the country with a satisfactory fortune within the next two or three years from now. He has had yellow fever and many attacks of malarial fever, and he now considers himself almost immune from further attacks. The climate, however, in general is so depressing that he, with nearly all the other merchants, go to the North every year or two for rest and recreation. Manoas is never free from yellow fever, but it is not regarded as so deadly as some of the forms of malarial fever. With due precautions as to health and careful protection from mosquitoes, temperance in eating, drinking, etc., one may escape almost all of the fevers. Yellow fever, once very prevalent in Para has within the last year been almost wholly banished by methods similar to those employed in Havana and New Orleans with such marked success. Steps are being taken to banish fevers from Manoas success. Steps are being taken to banish fevers from Manoas also. The temperature is not usually very oppressive except in mid-day hours. Below the Rio Negro the average width of the river is about three or four miles. Masses of raggedy slow-growing cumuli arise early in the morning sometimes lasting all day, thickening toward evening with more or less lightning. No rain during the last few days. Large flocks of white egrets, ducks, parrots, etc, are seen almost all the way up from Para. Buzzards are never absent. The Manoas Theater, the Catholic Cathedral, and Customs House are magnificent buildings. About fifty steamers are in sight from the deck of the Dennis near the dock, lying at anchor here. Many of them comparatively small, to run up branches of the river for rubber, and general trade, carrying oil, flour, and canned goods for trade.