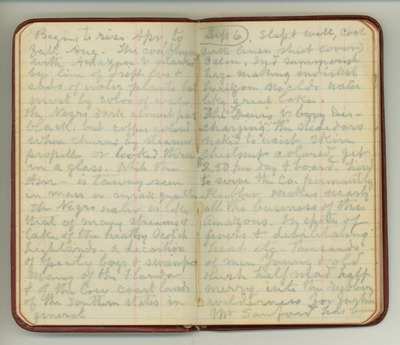 It begins to rise in April and to fall in August. The confluence with the Amazon is strikingly marked by a line of drifting leaves, sods of water plants, and uprooted trees, but most strikingly by the contrast in color of the two streams. The Negro water is very dark, almost pure black, but in bucketfuls it appears to be coffee-colored, while that of the Amazon is tawny-colored, both in the mass and in small quantities. Dark chocolate or coffee-colored Negro water is like that of many streams and lakes of the heathy Scotch highlands; a decoction of peat bogs and swamp. Many of the Florida streams and of the low coast lines in the Southern States are of this same color as the Rio Negro. Strange to say, the Rio Negro in entering the main Amazon, suddenly disappears, flowing underneath the great yellow Amazon food. The steamship in crossing this abrupt line churns up some of the dark water in detached masses which float for a few minutes on the surface of the yellow water with a very striking effect. September 6, 1911. Weather last evening and this morning pleasantly cool and calm and clear. In mid-day the air had an Indian-summerish haze around the horizon, making distant objects indistinct. Not a single cloud in the sky. The cargo of our steamer is being discharged by a crew of Indian stevedores, naked to the waist. Skin is chestnut color. They receive the high wages of two dollars and a half per day with board. They are hired to serve the Company permanently. They are extremely strong and able to work with a will. Rubber makes nearly all the business of the Amazon and its great tributaries. In spits of fevers and debilitating heat, etc., thousands of men, young and old, rush half crazy, half merry, into the rubbery wilderness for fortunes. Most of the rubber is collected by Indians who tap the trees over a great extent of territory and bring in their rubber in their canoes. My friend, Mr. Sanford, had been