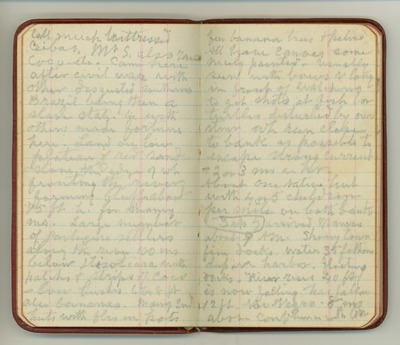 tall-buttressed ceibas. Mr. Stone also raises large quantities of cacao. He came here after the Civil War, with other disgusted Southerners, Brazil being then a slave state. He with others has made a fortune here although slavery for many years has been abolished. The land here is on a low plateau of red sandstone, the edge of which touches the river and forms bluffs about seventy-five feet high for many miles. For a hundred miles or so below this town there are many Portuguese settlers, with patches and strips of cacao and bananas. Some of the cacao plantations are only made up of low bushes six or eight feet high. The Indian settlements are only solitary huts, with a few banana trees and palms, but it was pleasant to see bright flowers in pots in front of these little huts. All have a few banana trees and palms, and of course all have canoes, tied to a bush. Some of them nicely painted. Many of them were seen in their canoes with very long bows and arrows standing erect in the prow watching to get a shot at fishes or turtles disturbed by our steamer when running close to the bank to escape the strong current; of two or three miles an hour. There is about one of these native huts per mile on both banks. Few of those homes had less than four or five children. September 5, 1911. Arrived at Manas about 9:00 A.M. A showy town claiming a population of about 100,000 inhabitants. Many remarkably fine buildings, appearing strange in the midst of the greatest forest wilderness in the world. The town is situated near the mouth of the Rio Negro on the left bank about nine miles above the confluence with the main river. The river here is so broad it looks more like a large lake than a river. Water in the harbor is about thirty-five fathoms in depth. The docks are floating on iron pontoons. The water rises in the rainy season about forty feet. It is now falling. Has fallen about twelve feet below high water mark.