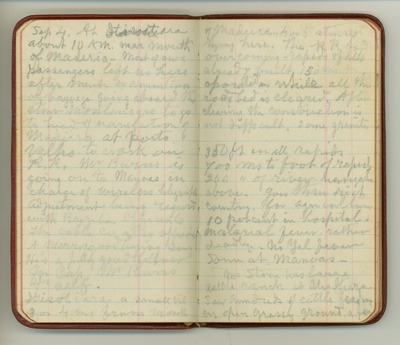 September 4, 1911. Reached Itacoaticara about ten o’clock this morning. It is situated near the mouth of the Madeira River. Most of our passengers left us here, after undergoing much examination of baggage. They went aboard the steamer Montenegro to go to the head of navigation of the river at Port Velho to work on the railroad, which now, I am informed, will soon be completed, around the two hundred and fifty miles of the rapids to a long stretch of navigable water which extends to Bolivia. Two hundred miles is now finished, leaving only fifty miles, on which the greater part of the roadbed has been completed. Mr. Burns is going to Manoas in charge of wireless telegraphs which are now in working order, but it seems that the Brazilian Government will not allow the line to be worked until the law has been complied with. All that is required, it seems, the purchasable good-will of certain officials. The franchise for the wireless is also opposed by the cable company, which has its line from Para to Manoas along the bed of the river. The cable is oftentimes broken by sunken trees carried along the bottom of the river in the time of high water. The Captain, Mr. Burns, and myself had a merry goodbye from the passengers who left us. As they pulled away to the steamer that was to take them up to the Madeira they hurrahed in fine style and sang: “He’s a Jolly Good Fellow.” But many of those poor fellows were far from merry, and were perhaps singing to keep their own courage up, for malarial fevers are extremely fatal along the railroad line in the heart of the tremendous wilderness. Itacoatiara is a small village three or four miles from the mouth of the Madeira. There are four or five steamers lying here. The greater part of the difficulty in making this railroad, as I have said, is in clearing the roadbed, and only about fifty miles more of track are required to be laid. The larger stumps were blow up with dynamite, but both roots and branches of most of the trees are so full of sap that they would not burn down. They had to be cut up into smaller pieces. A good many granite hills had to be blasted through, which furnished material for filling in the swamps. In all this long line of rapids the vertical descent is only about three hundred and fifty feet. The navigable part of the river above the rapids flows through a rich country for agriculture. Sometimes during the building of this railroad over 10 percent of the workmen were in the hospital, and enormous quantities of quinine have been required. The malarial fever here is of so deadly a kind that some deaths followed after only three days of sickness. Mr. Stone, an American, has a large cattle ranch near Itisotiara. I saw hundreds of cattle feeding on open grassy ground, on which grew