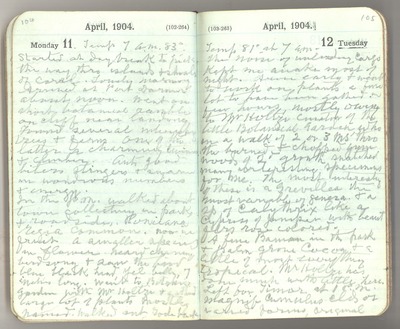 April 11. Temperature 7:00 A.M. 83°. Started at daybreak to pick the way through islands and shoals of coral. Lovely morning. Arrived at Port Darwin about noon. Went on short botanical ramble on cliff near landing. Found several interesting trees and ferns. One of the latter a charming twiner and climber. Ants good biters, stingers and swarm in wondrous numbers and energy. In the afternoon, walked about town collecting in park, and roadside. Ponicana regia common, now in fruit. A smaller species in flower. Heard charming bird song and saw the bird, blue black head, yellow belly, 7 inches long. Went to Botanic Garden with Mr. Holtze and gathered large lot of plants, mostly named. Walked out, rode back. April 12. Temperature 81° at 7:00 A.M. The noise of unloading cargo kept me awake most of the night. Arose early and went to work on plants, a fine lot to have been gathered in few hours, mostly owing to Mr. Holtze, Curator of the little Botanical Garden who, in a walk of 2 or 3 miles through the burned and chopped gum woods of second growth, shatched many interesting specimens for me. The most interesting of these is a Grevillea, the most variable of genera, and a species of Calythrix, like a cypress or juniper, with beautiful flowers rose colored. A fine Banian in the park and palm grove, Cocoa and a little of most everything tropical. Mr. Holtze has done much with little here. Left for Timor at 1:00 P.M. Magnificent cumulus clouds of varied forms, original.