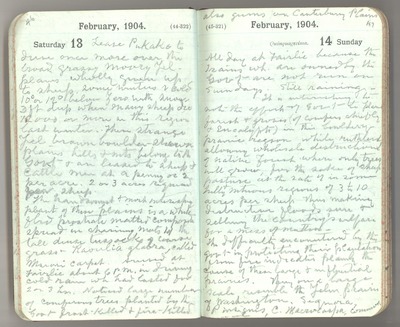 February 13. Leave Pukaki to drive once more over the broad grassy moory yellow plains, wholly given up to sheep. Some winters are very cold here, ten or twelve degrees [Fahrenheit] below zero, with snow three feet deep, when many sheep die, 12,000 or more in this region last winter. These strange yellow-brown, boulder strewn plains, hills and mountains belong to the government, and are leased to sheep and cattle men at a penny or two per acre. Two or three acres [are] required per sheep. The handsomest and most interesting plant of these plains is a white flower, prostrate matted Compositae, spread in charming mats between the tall dense tussocks of coarse grass; Raoulia glabra is called Marconi [Maori] carpet. Arrived at Fairlie about 6:00pm in driving cold rain which had lasted for two or three hours. Noticed large number of coniferous trees, planted by the government, frost-killed and fire killed; also gums on Canterbury plains. February 14. All day at Fairlie because the trains which are owned by the government are not run on Sunday. Still raining. It is interesting to note the efforts of government to plant forest and groves (of conifers chiefly, and eucalypti) in this bouldery prairie region, while ruthlessly allowing wholesale destruction of native forest where only trees will grow. [This] for the sake of sheep pasture at the rate (in some hilly mountain regions) of three to ten acres per sheep, thus making destructive floods sure and selling the country’s welfare for a mess of mutton. The difficulty encountered by the government in protecting their plantations from fire indicates plainly the cause of these large and influential prairies. They, on a large scale, resemble the Yelm prairies of Washington, Sequoia sp., Pinus insignis and Cupressnum marcocarpa are common.