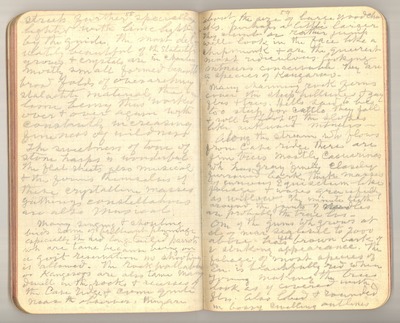 streets further specially lighted with limelight by the guides. The most delicately beautiful of the stalactite groves and crystals are in chambers mostly small, formed beneath broad folds of overarching stalactite material, the lime being thus worked over and over again with constantly increasing fineness of wildness. The sweetness of tone of stone harps is wonderful. The flat streets[sheets] also musical and the forms themselves of these crystalline masses, gatherings, constellations, are also musical. Many singing and shouting birds, some of brilliant plumage, especially the red long-tailed parrots which are tame because being on a government reservation no shooting is allowed. The rock wallabies, or kangaroos are also tame. Many dwell in the rocks and recesses of the cave ridge and come quite near the observer. They are about the size of large woodchucks. Perhaps a little larger. They climb or rather jump will, look in the face like a chipmunk, and are the queerest, most ridiculous looking mountaineers conceivable. They are a species of kangaroo. Many charming rock ferns cover the steep hillsides and gay flowers and trees. Hills said to be too steep for cattle, they fall and roll to foot of the slopes like awkward mountaineers. Along the stream which flows from cave ridge there are fine trees, mostly Casuarinas which has gray finely closely furrowed bark, thick masses of curious Equisetum-like foliage and waves gracefully as willow. The minute teeth around the joints of needles are probably the tree leaves. One of the gums which grows at elevation of near sea level to 2000 feet above, has yellow brown bark of very striking appearance. The foliage of most species of Eucalyptus is beautifully red when young, making the trees look as if covered with flowers. Also lobed and rounded in bossy swelling outlines.