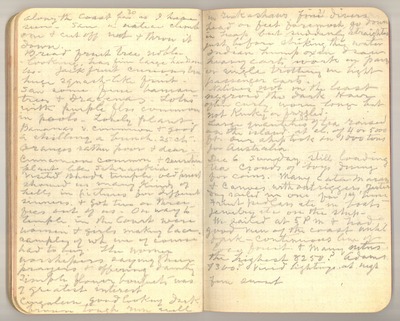 along the coast far as I have seen. Saw a native climb one and cut off nut and throw it down. Bread fruit tree noble-looking, has fine large handsome leaves. Jack fruit curious tree, huge squash-like fruit. Saw some fine banyan trees and Dracenas. Lotus with purple flowers common in pools. Lovely plant. Bananas very common and good - a shilling a bunch, 25 cents. Oranges rather poor and dear. Cinnamon common and sensitive plant like Schrankia. Visited Bhuda Temple, old priest showed us many kinds of hells in pictures for different sinners, and got two or three fees out of us. On way to temple in the Court were women and girls making lace, samples of which we, of course, had to buy. The women worshippers saying their prayers and offering dainty simple flowery bouquets was of greatest interest. Cingalese good looking, dark brown, tough, run well in rickshaws. Fine divers, head or feet foremost, go down in heap but suddenly straighten just before striking the water. Indian hump oxen draw heavy carts, work in pairs or single trotting in light passenger carts. Natives not in the least negroid though dark. Hair often curly, worn long but not kinky or frizzled. Large quantities of tea raised on the island at elevation of 4 or 5000 feet. Our ship took on 1000 tons for Australia. December 6th Sunday, Still loading tea. Crowds of boys diving for coins. Many catamarans and canoes with outriggers. Yesterday sailed in one, for first time. Fruit pedlars, etc., on the ship. We sailed at 5:00 P.M. and had good view of the coast until dark. Continuous line of Coco fruit and many mountains, the highest 8250 feet (?). Adams 7300 feet (?) Vivid lightnings at night. Fine sunset.