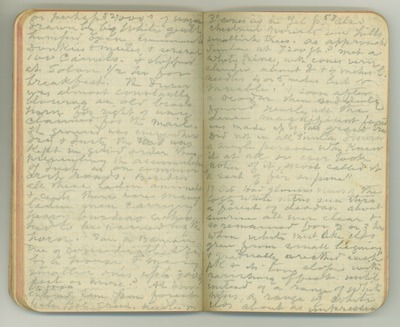 or perhaps thousands of wagons drawn by big white gentle humped oxen, innumerable donkeys and mules, and several hundred camels, and stopped at Solon half an hour for breakfast. (Solon breakfast, Elevation 5000, 27 miles from Kalka.) The driver was almost constantly blowing an old brass horn for right of way claimed for the mail. The ground was everywhere dry and dusty, the road was kept in good order thus preventing the accumulation of dust as on common dirt roads. Besides all these laden animals and carts, there were many laden men carrying heavy burdens who had to be warned by the horn. Saw a banyan tree of considerable size by a house and many smaller ones up to 3000 feet or more (?) At 4000 to 5000 entered fine pine forest, pale yellow green; needles in 3 (?) cones as in Yellow Pine. Also chestnut forests on hills, smallish trees. As approached Simla at 7200 feet (?) met a white pine, with cones very slender, about 3 to 4 inches long, needles 4 or 5 inches, but very variable, and soon after a Deodar, then suddenly found nearly all the dense magnificent forest was made up of this grand tree. Did not in all Simla discover a single person who knew it at all, or ever took notice of it. Most called it “a sort of fir or pine”. October 17th. Had glorious views of the lofty white mountains seen through a forest of deodar. About sunrise all were clear and so remained for 2 or 3 hours when white mist like clouds grew from small beginnings and gradually wreathed each peak and its long slopes with ravishing effect, until instead of a range of white mountains, a range of white clouds about as impressive