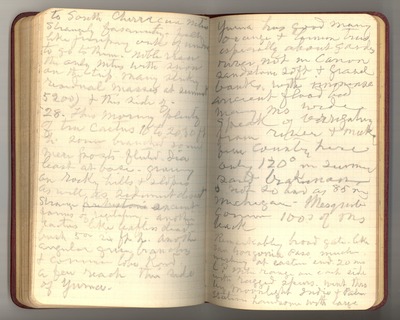 to South Chericua mtns, strangely fascinating, felt like jumping out of window to go to them; noble view, the only mtns with snow on the trip; many striking residual masses at summit (5200) and this side of. [Nov 28]. This morning plenty of tree cactus 10 to 20, 30 ft h, some branched, some mere branched, some mere posts, fluted, dia least at base, growing on rocky hills and slopes as well as sediment desert. Strange prehistoric ancient forms of vegetation; another cactus like leafless dead, bush 5 or 6 ft h; another angular, green branches, and common lobe kind. A few reach this side of Yuma. Yuma has good many orange and lemon trees, especially about gardens; river not in canon, sandstone soft and gravel backs, with immense ancient flood bed, many ms wide. Speak of irrigating from river and making fine country here. Only 120 degrees in summer, said brakeman, and not so bad at 85 in Michigan. Mesquits common 100s of ms back. Remarkable broad gate - like San Gorgonia Pass, much washing at Eastern end, 20 ms l? Mtn range on each side with ragged spurs, went thro’ by moonlight; Indio and Palm stations handsome with large