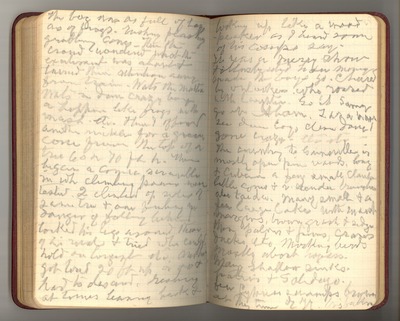 the bog was as full of boys as of frogs, rushing, plashing, grabbing cones. Then the crowd wondered what the excitement was about, and turned their attention away from train. “W’at’s the matter, w’at’s in dem crazy boys a - hoppin’ like frogs in the ma’sh”, etc. Then I offered another nickel for a green cone from the top of a tree 60 or 70 ft h. Then began a comic scramble in wh climbing power was tested. 3 climbed op sides of the same tree and one feeling in danger of falling behind locked his legs around those of his rival and tried who could hold on longest, etc. Another got tired 20 ft up or so and had to descend, resting at times leaning back and looking up “like a woodpecker”, as I heard some of his comps say. It was a merry show and illustrated how money made the boys go, cheered by onlookers who roared laughter, “Got it Sammy, got it Abram, Wash, see dem boy, clean daug-gone crazy”, etc., etc. The country to Gainesville is mostly open pine woods, long and Cuban, a few small Clan, little cones and v slender branches, also Taeda; many small and a few large lakes with marsh margins, brown grass and sedge, then palms and pines; cranes, ducks, etc., mocking birds mostly about mosses; many shallow sink; patris and Solidago, few cypress swamps brown at this time of Y, lves fallen.