August 1896, From San Francisco to Alaska and Return, the Osborn Trip Image 25 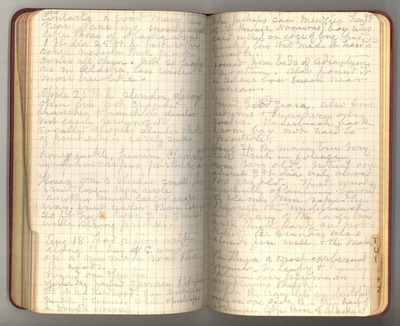 Contorta, a good many trees near Nanimo, mostly small like those of Alaska about a foot in diameter 25 feet high bark rather rough, medium thick half inch, cones now all open, not so leafy as in Alaska less wide, more tree like. Apple 25 feet high, slender sprays open leaves, not crowded, branches and branchlets slender, not easily recognized, so called clover, slender spike of fruit, which is rarely seen. Honeysuckel pea vine clematis, symphor carpus, portulacca, roses, one very slender, small leaves, fruit longer than wide, another much larger every way. Fruit wider than long 20 feet high. Rose two or three inches wide. Strong prickles. Aug 18th Had a fine walk along the bay northeastward on a new road through the woods found one yew tree. Yesterday found spiraea, a foot in diameter, 25 feet high, hardwood, saw Douglass purple and common white and perhaps a fourth species. Today saw perhaps Sitka spruce. Heard of it through Nanaimo boy, who said a tree on edge of bog had prickle leaves that made it hard to handle. Found fine beds of adiantu pedatum, also found it in silver bow basin near Juneau. Found goodyeara, also fine sedums and heuchera on rocks. Underbrush back from the bay not hard to penetrate. Douglas spruce the main tree. Very tall and rich in foliage. None very old. Noticed one about 3 feet in diameter, only about 100 years old. These woods evidently oftentimes burned. The flames run rapidly through the underbrush but many of the large trees with thick bark are not killed. Abes Grandis also stands fire well and the maple. Thuya a most exuberant grower, very leafy and branchy, plume over plume in sumptuous thatch. When the branchlets are developed only on one side, then they hang edgewide like those of the Alaska cedar.