August 1896, From San Francisco to Alaska and Return, the Osborn Trip Image 9 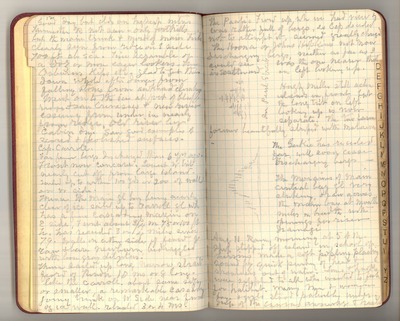 Good day, but clouds on highest mountain. Fairweather range not seen, only foot hills but the main trunk and most of the main tributaries were clearly seen from a ridge on the east side, 700 feet above the sea. Had fine scramble with a dozen or more eager lookers. The Osbornes, Kips, etc. Glad to get them down whole, after danger from falling stones from their awkward climbing. Went on to the margin of the Muir Glacier at the foot of the bluff ridge and showed them some crevasses and a new river, issuing from under the ice nearly from the ridge, the old river, by my cabin, now dry. Saw good examples of scored and polished surfaces. Capt. Carroll. Far fewer bergs discharged than six years ago. Front now concave. The lowest west tributary nearly cut off from the large island. Sailed up to within a hundred yards or perhaps two hundred of the ice wall on the west side, thence the main glacier bay, being nearly clear of ice, we sailed up to Carroll Glacier, which has a fine cascading margin on the east side . Front wall, ¾ of a mile long, 75 or 100 feet high. Has receded three or four miles since my visit in 1879. Walls on either side of the fiord raw and bare new born bedraggled with loose gray detritus, thence we sailed up the long narrow fiord of the Rendu Glacier ten miles or eight long, like the Carroll Glacier, about same size or a little smaller, a remarkable cascade joining the trunk on the west side near the front of ice wall. This glacier has retreated three or four miles since my first visit. The Pacific fiord, up which we had a view, was rather full of bergs, so the Captain decided not to attempt it. It seemed greatly changed. The Hoona or Johns Hopkins Glacier not now discharging bergs, neither as far as I could see was the one nearer, that is southward on the left looking up. High Miller Glacier still active. Islands in front, but the long tributary on the left as you look up is now separate and independent, the two former beautifully striped with moraines. The Geikie Glacier has receded far. Will probably soon cease discharging bergs. The moraines of the main central bay glacier very striking, drawn across the main bay at mouth, miles in breadth, with openings for drainage. Aug 11th. Rainy morning at 5am. Ship stopped off island in a school of herring. The fish made a sort, poppling, splashing sound by quick pushing of head and shoulders out of water. Lines and hooks were supplied to all who wanted to fish for halibut. Many men and women, boys and girls stood patiently under the drip of the canvas awning and handled