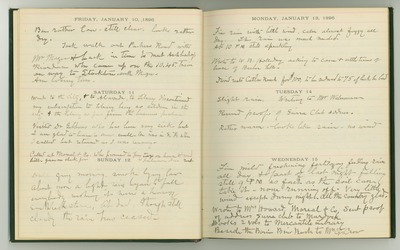 Took walk out Pacheco Road with Mr Magee & back in time to meet Archbishop Riordan who came up on the 10.45 train on way to Stockton with Magee. Am losing time.

Went to the city, & to Alameda, to library discontinued my subscription to library being so seldom in the city & the library so far from the business [ ]

Visited Dr Gibbons who has been very sick but I am glad to learn is now well. He was in S.F. [San Francisco] when I called but returned as I was leaving.

Called at Moreal & Co. [Company] who promised to pay tax on house & send bill - gave me check for balance due rent.

Dull grey morning. Smoke lying low about noon a light rain began to fall everybody wishing it were a heavy southeast storm. At dar [dark], though still cloudy the rain has ceased.

Fine rain with little wind, calm almost foggy all day. This rain was much needed. At 10 PM still sprinkling

Wrote to W B. Holliday asking to come & settle terms of lease of Barber Hills.

Fine mild freshening fertilizing feeding rain all day & part of last night falling still 9 PM as fast as the soil can take it - none running off. Very little wind except during night. All the country glad.