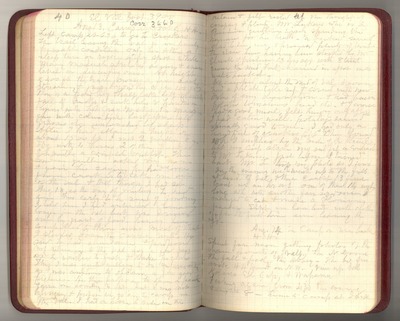 Aug 13. Camp at foot of H H. El. Val foot 8900. Corr 3660. Left camp at 6.30 to go to Crooker’s. The trail leaving the valley is in fairly passable condition only here and there a steep turn or rocky stepy spot. While many moderate stretches occur and even level or descending ones. At height of 400 ft the trail crosses a fine cool stream, and just beyond this a few hundred yards there is a pond lily half lake half marsh full of ducks and sink holes very handsome lying with hot gray rocks, the margin gay with columbine larkspurs ab grassesete untouched by sheep. After I had attained a height of about 1500 ft I met two gentlemen and a dog with 4 horses, two of them packed, evidently a complete outfit. The leading gentleman asked my name and gave his saying he had come from Crockers to take me out of the val. and that though I had set Aug. 18 as the day of meeting he had come thus early to be sure of finding. I told him I had intended remaining longer in the valley but was driven out by want of food, having been compelled to throw away most of what I started down the canyon with. He saw he had abundance and proposed my returning to the valley for a few days as he wanted to fish and take pictures. This I was quite willing to do especially as I Was anxious to obtain a few good pictures. He then proposed to open a pack and give me something to eat, but I was not hungry and proposed to pen a pack and give me something to eat, but I was not hungry and proposed we go on to camp in the valley. I had a horse to ride on the return and felt rested at the thought of company and plenty. Mr. Lukens who is a Pasadenan gentleman wisely spending the summer for his health - a banker seemed glad to see me and promised plenty of trout. The river here having been stocked by Mr Elwell and partner 13 years ago with 8 trout from the middle fork, carried in afoot in a water bucket - We camped about the middle of the val and soon had a portable table set and covered with new dishes of every description and had bacon, potatoes, tomatoes, bread etc. and of course had a good meal, felt hungry only after I had eaten well; potatoes seemed specially good to me. I had only a handful of crackers left and tea when found, which I emptied by the side of the trail, left my cup also - my outfit a contrast to Mr. Lukens. Just before I turned back Mr. L took my photo as I was. In the evening we went up to the falls at head of valley and there caught 13 fine trout in an hour or two, one of them 14 in long which with another fair sized one I managed to eat and made a glorious feast. Slept in low tent with clothes on for the first time since leaving the Yosemite. Aug 14. Camp on river bank Hetch Hetchy. Spent forenoon getting photos of the main points of the valley. The N dome the fall and pool, the abbey, the big fine rock, Hetch Hetchy point on N W - view up val. Kolama, El Capitan, and Wapama. Fishing again from 4.30 this evening caught 8 - home to camp at dark.