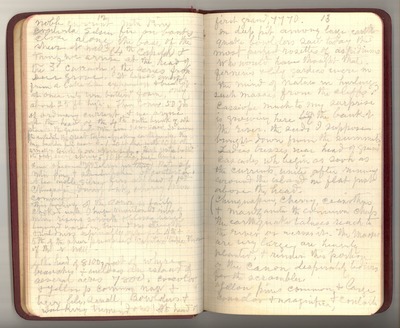 noble current. Mountain pine cortorta, silver fir, on banks close along the base of the sheer north wall (4th Capitan) and then we arrive at the head of the 3d cascade of the series from Deer grove. It lapses smoothly from a lake-like expansion and breaks at once into torn battered foam, only about 25 feet high. Then come 50 yards of ordinary current and we arrive at the head of the 4th on the brink of which stands the grandest mountain pine I ever saw. IT seems to antedate the great talus - making earthquake though huge bowlders fell near it - 1, 20 ft. dia with 10 ft. others smaller touch it on the upper side. High water bathes its feet, every spring; 10 ft, dia., huge limb. Four specimens of Mag. Silver fir, Paton sp. Mountain pine and slender form of contorta. A few noble Silver firs at head of 1st Chinquapin, dwarf oak, cherry now common. This portion of the canyon is fairly choked with huge moutoneed ribs of mountains rising smooth and glossy wave in tremendous strength and wildness especially opposite 4th and 5th of the sheer precipices capitan like those of the North wall. The head of 8.100 ft. foot of where branches and encloses an island of several acres 7800. Concolor and Yellow pine common now and tiger lily, small, Bowlders and walking tremendous. At head of first grand, 7770. In deep pit among large earthquake bowlders saw today the most perfect rosettes of aspidiums. Who would have thought that ferneries and lily gardens were in the mind of nature in hurling such masses from the cliffs? Cassiope much to my surprise is growing here on the bank of the river. The seeds I suppose brought down from the summits. Ladies tresses near head of grand cascades which begin as soon as the currents unite after running around the island in flat just above the head. Chinquapin, Cherry, Ceanothus and Manzanita the common chaparral. The earthquake taluses reach to the river or across it. The masses are very large, are heavely planted, and render this portion of the canyon desperately tedious for the scrambler. Yellow pines common and large, concolor and magnifica, and contorta