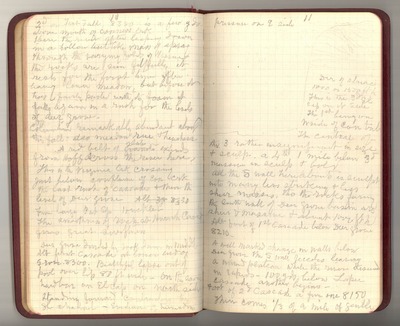 Second or Tent Fall, 8380 alt. is a few yards above mouth of Conness creek. Here the river after leaping down in a hollow tent-like mass of spray through the varying folds of tissue the rocks are seen fitfully it rests for the first time after leaving lower meadow, but before it has fairly parted with its foram it falls again in a rush for the levels of deer grove. Columbine remarkably abundant about this fall also meadow rue and henshera. A red belt of slate extends from Hoffman across the river here. This is the Virginia creek crossing just below confluence of Conness creek. The last rush of cascades and then the level of deer grove alt. 8330. Fine large Paton spruce huckleberry the smoothness of rock at Hurah cascade gives great swiftness. Deer grove divided by rock dam in middle. Alt at first cascade of lower end of grove 8300- Beautiful lapse out of pool over lip 80 feet wide on the same hard bar or El Capitan on north side standing forward contracting the glacial channel evidence of tremendous pressure on east side direction of striae 1000 or 1500 feet high this is the third El Capitan on the north side, the first being on the west side of Conness tributary the central of the three rather insignificant in size and sculpture. A 4th one mile below, massive in sculpture and bold all the south wall hereabout is sculptured into many less striking and less sheer masses. Though the rocks forming the south wall of Deer grove basin are sheer and massive and about 1000 feet high. Alt foot of first cascade below Deer grove 8210 ft. A well marked changed in walls below Deer grove, the south wall recedes leaving a waved plateau while the river descends in rapids- 100 yards below Lapse cascade another begins - Foot of second cascade a fine one 8150. Then comes on third of a mile of gentle