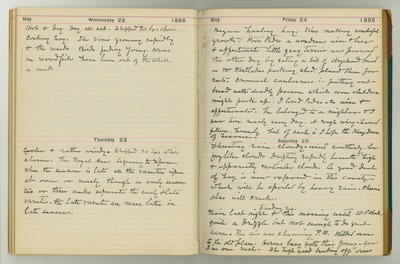 May Wednesday 22 1895 Hot & dry. Hay all cut. Shipped 30 boxes cherries. [Cocking] hay. The vines growing rapidly & the weeds. Birds feeding young. Wrens in woodpile have been out of the shell a week. Thursday 23 Cooler & rather windy. Shipped 34 boxes white cherries. The Royal Anns beginning to ripen. When the season is late all the varieties ripen at once or nearly though in early seasons two or three weeks separate the early & late varieties. The late varieties are never later in late seasons. Friday 24 Began hauling hay. Vines making wonderful growth. [Begin here] Poor Pedro a wondrous wise & busy& affectionate little gray terrier was poisoned the other day by eating a bit of strychnine bread in Mr. Westlake’s packing shed. Placed these for rats. Criminal carelessness in putting out bread with deadly poison which even children might pick up. I loved Pedro, so wise and affectionate. He belonged to a neighbor & I saw him nearly every day. A rough wiry-haired fellow. Homely but of such is I hope the Kingdom of Heaven. Saturday 25 Threatening rain, cloudy, wind southerly. Low foglike clouds drifting rapidly beneath high & apparently motionless clouds. A good deal of hay is now exposed in this county which will be spoiled by heavy rain. Cherries also will crack. Sunday 26 Rain last night & this morning until 10 o’clock. Quite a drizzle but not enough to do great harm. The air was charming this P.M. Walked over to the old place. Herons busy with their young, saw 3 in one nest. The high wind breaking off vines.