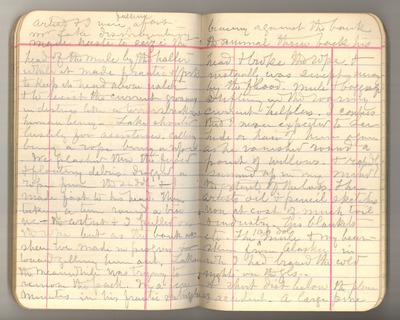 artist and I were pulling afoot. Mr. Lake dismounting made haste to seize the head of the mule by the halter, while it made frantic efforts to keep its head above water and to resist the current, groaning in distress like a terror-stricken human being. Lake shouted lustily for assistance, calling, Bring a rope, bring a rope. We plashed through the fixed and floating debris, dragged a rope from the saddle, and I made fast to his head; then taking a turn round a tree, we the artist and I pulled on the rope, but as the bank was sheer we made no progress toward getting him out. Lake the meanwhile was trying to remove the park. In a few minutes in his frantic struggle, bracing against the bank, the animal threw his head and broke the rope, and instantly was swept away by the flood, mule baggage drifting in the roaring current helpless. I confess that I never expected to see hide or hair of him again as he vanished round a point of willows, and rapidly summed up in my mind the extent of the loss; the artist’s oil and pencil sketches, won at cost of much toil and industry; his blankets, etc; the hundred dol mule and my bear skin from Alaska in wh I had braved the cold nights on the glaciers. A short dist below the place of accident a large pine