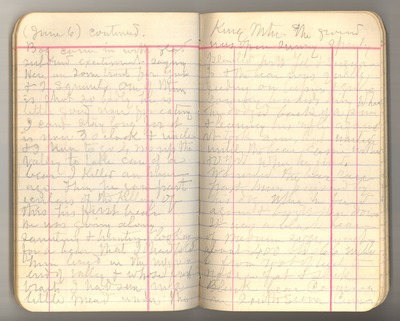 June 6 continued. Boy came in with glad subdued excitement saying, “Here are some trout for you and 2 squirrels; one of them is shot so badly he is little good for eating. I can’t stay long for it is now 3 o’clock and uncle and I have to go 4 ms up the valley to take care of a bear I killed an hour ago.” Then he gave particulars of the killing of this, his first bear. He was going along sauntering and hunting, looking for a bear that I had told him lived in the upper end of valley, and whose tracks I had seen in a little mead under The King Mtn. The ground was open, sunny, sparsely planted with yel and sugar p, and the bear was quietly feeding on lu and grass, coming towards him, when he dodged back of a pine, and leaning his rifle against it, took aim, but waited until the bear came within 50 yds when he fired. Wounded, the bear ran past him, pursued by his dog, when he fired again and brought him down. It was a black bear of medium size, weighing about 400 lbs., 66 inches l from root of tail to nose, fat and sleek. Black bear common in south Sierra, common