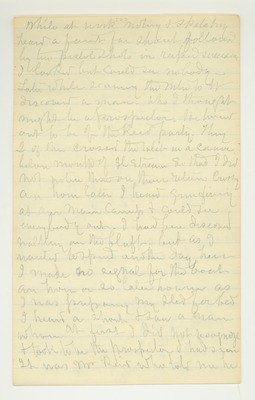 [6] While at work writing & sketching heard a faint far shout followed by ten pistol shots in rapid succession. I looked but could see nobody - Later while scanning the Mtn. to the W. discovered a man who I thought might be a prospector. He turned out to be of the Reid party. They 2 of them crossed the NW inlet in a canoe below mouth of the gl. stream, so that I did not notice them on their return crossing. An hour later I heard gun firing at our Main Camp & could hear everybody shout. I had been discovered walking on the bluff but as I wanted to spend another day here I made no signal for the boat. An hour or so later as I was preparing my sled for bed I heard a shout & saw a man whom at first I did not recognize & took to be the prospector I had seen. It was Mr. Reid who told me he 00040