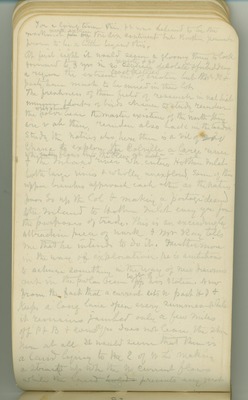 For a long time this point was believed to be the northern extreme of the Am[erican] continent, but Boothia peninsula proves to be a little beyond this. At first sight it would seem a gloomy thing to look forward to 3 years in so remote and so severely desolate and forbidding a region [Pt. Barrow], the extreme frost-killed end of creation, but Mr. R[ay] and party have much to be envied in their lot. The freshness of their field of research in natural history, innumerable flocks of birds, chance to study reindeer, the magnificent polar bear, the master existence of the north – they are very abundant there, reindeer also back in the tundra. Study the natives also, here there is a village of 200. Chance to explore the Colville, a large river which flows into the Arctic Ocean at Lat. ______, and the Inland River, which enters Hotham Inlet, both large rivers and wholly unexplored, some of their upper branches approach each other, as the natives go up the Colville and making a portage descend the Inland to Hotham Inlet every year for the purposes of trade. This is an exceedingly attractive piece of work, and Mr. Ray tells me that he intends to do it. Furthermore in the way of exploration – he is ambitious to achieve something in the way of new discoveries out in the polar ocean to the North of this station. Now from the fact that a current sets N. past H[otham] I[nlet] and keeps a long lane open every summer while it remains jambed only a few miles off Pt. B[arrow] and some years does not leave the shore here at all, it would seem that there is a land lying to the E. of W[rangel] L[and] making a strait up which the W. current flows, while the land prevents any great