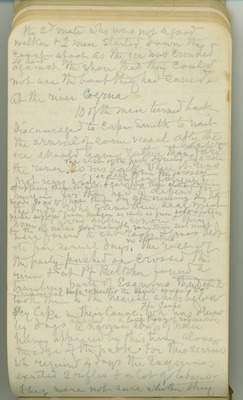 the 2nd mate, who was not a good walker, and two men started down the coast afoot as the ice was crowded so hard against eh shore that they could not use the boat they had saved. At the river Cogrna, 10 of the men turned back discouraged to Cape Smith to wait the arrival of some vessel after the ice should leave rather than attempt to ford the river. The rest of the party were directed by a native 20 miles back where it was not very wide or deep, where they crossed, stripping themselves and carrying their clothes on their heads so as to have them dry after crossing. Both parties suffered from hunger as well as from cold and fatigue, for they had to depend on the natives who good naturedly gave them seal meat, none to carry away however, and they were forced to eat roots and grasses, sedge, etc. for several days. At Pt. Beltcher they found a traveling party of Eskimos that after the Shaman had duly consulted the spirits, consented to take them to the nearest ship below Icy Cape in their canoe. The canoe was driven by dogs attached by a long thong of walrus hide, a narrow strip of water having appeared by this time along the edge of the pack. For this service, which required 4 days, the Eskimos exacted 2 rifles and a lot of tobacco. They were not sure whether they