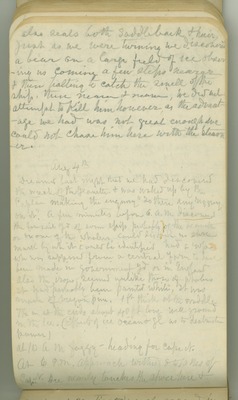 also seals, both saddleback and hair. Just as we were turning we discovered a bear from a large field of ice observing us he kept coming a few steps nearer and then halting to catch the smell of the ship. We did not attempt to kill him, however, as the advantage we had was not great enough. We could not chase him here with the steamer. Aug. 4th. Dreamed last night that we had discovered the wreck of the Jeanette, and was waked up by the Captain making the enquiry, “Is there any rigging on it?” A few minutes before 6 A.M. discovered the foresail of some ship, probably the Jeanette or one of the whalers. Could discovered no sure mark by which it could be identified. Had a rope which was supposed, from a central yarn, to have been made in government yard or in England. Also the irons seemed unlike those of whalers. It had probably been painted white. It was made of Oregon pine. 1 ft. thick at the middle, thin at the ends, about 40 ft. long, well ground in the ice (Effects of ice, oceans, and glacier as to destructive power.) At 10 A.M. foggy, heading for Cape N. At 6 P.M. approach within 8 or 10 miles of Cape N. Ice nearly touches the shore here and