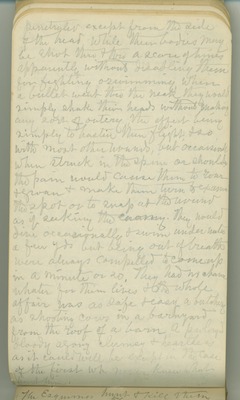 penetrated, except from the side of the head, while their bodies may be shot through and through a score of times, apparently, without disabling them for fighting or swimming. When a bullet went through the neck, they would simply shake their heads without making any sort of outcry, the effect being simply to hasten their flight. The same was true of most other wounds. But occasionally, when struck in the spine, or shoulder, the pain would make them roar, and groan, and turn to examine the spot, or to snap at the wound as if seeking the enemy. They would dive occasionally, and swim under the water a few yards. But being out of breath, they were always compelled to come up in a minute or so. They had no chance whatever for their lives, and the whole affair was as safe and easy to butchery as shooting cows in a barnyard from the roof of a barn. It was a prolonged, bloody agony, as clumsily and heartless as it could well be, except in the case of the first, which never knew what hurt him.