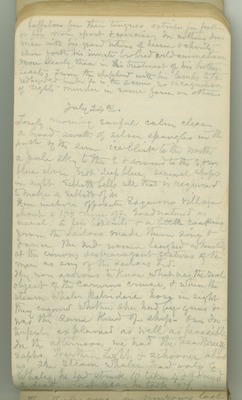 buffaloes for their tongues, ostriches for their feathers, or for mere sport and exercise. In nothing does man, with his grand notions of heaven and charity, show forth his innate, low-bred, wild animalism more clearly than in his treatment of his brother beasts. From the shepherd with his lambs to the red-handed hunter, it is the same; no recognition of rights – only murder in one form or another. July 24. A lovely morning, sunful, calm, clear; a broad swath of silver spangles in the path of the sun; ice-blink to the north; a pale sky to the E. and around to the S. & W. blue above, not deep blue; several ships in sight, Sabbath bells are all that is required to make a Sabbath of the Day. Ran ashore opposite the Eskimo village; about a hundred came off. Good-natured as usual. A few biscuits and a little coaxing from the sailors made them sing and dance. The Eskimo women laughed as heartily at the curious and extravagant gestures of the men as any of the sailors did. They were anxious to know what was the real object of the Corwin cruise, and when the steam whaler Belvidere hove in sight they inquired whether she had big guns and was the same kind of ship. Our interpreter explained as well as he could. In the afternoon we had the Sea Breeze, the Sapho, and the Northern Light, and the schooner Handy about us. The steam whaler had only 6 whales. He had struck 10, taken 4, and found 2 dead. Last year he took 27.