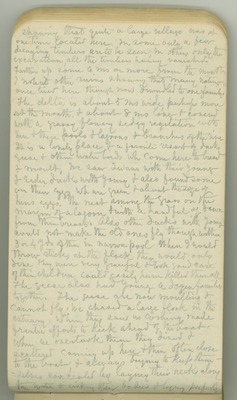 showing that quite a large village was at one time located here. In some only a few decaying timbers are to be seen, in others had vanished and only the excavation remained, all the timbers had vanished. Some 6 miles farther up the stream I noticed other ruins, indicating that many natives once lived here, though now their number has dwindled to one family. The delta is about 5 miles wide, and about 8 miles long. It is covered with a grassy, flowery, sedgy vegetation, with here and there pools, lagoons, and branches of the river. It is a lonely place, and a favorite resort of ducks, geese, and other water birds which come here to breed and to moult. We saw whistling swams, olar americanus, with their young, eider ducks, also with their young, and were found some on their eggs, which are green and about the size of hens’ eggs. Their nests were among the grass on the margin of a lagoon and were made with a handful of down from their breasts. These as well as other ducks, which had their young with them, could not be made to fly, though we came within 3 or 4 yds. of them in a narrow pool. When I threw sticks at the flock they would only dive. They were very graceful, and took good care of their children. We could easily have killed them all. The wild geese, which we saw, also had young – a dozen families altogether. They are now moulting and cannot fly. We chased a large flock in the estuary. When they saw us coming, they made frantic efforts to keep ahead of the boat. When we overtook them they dived and scattered, coming up here and there, often close to the boat, and always trying to keep themselves concealed by laying their necks along the water and sinking their bodies and lying perfectly