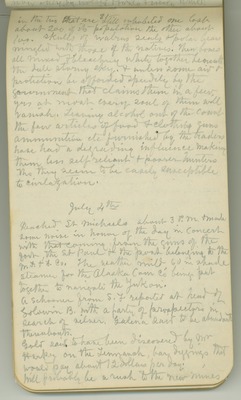 in the two that are still inhabited one lost about 200 of its population, the other about 100. Skulls of walrus, seals, and polar bears mingled with those of the natives, their bones all mixed and bleaching white together beneath the dull stormy sky, and unless some aid and protection be afford speedily by the government that claims them, in a few years at most every soul of them will vanish. Leaving alcohol out of the count, the few articles of food and clothing, guns, ammunition, etc. furnished by the traders have had a degrading influence, making them less self-reliant and poorer hunters, though they seem to be easily susceptible to civilization. July 4th. Reached St. Michaels about 3 P.M. and made some noise in honor of the day in concert with that coming from the guns of the fort, the St. Paul, and the post belonging to the W.F. & T. Co. The weather mild, 60 in shade. Steamer for Alaska Com. Co. being put together to navigate the Yukon. A schooner from S.F. reported at head of Goldwin B. with a party of prospectors in search of silver. Galena said to be abundant thereabouts. Gold is said to have been discovered by Mr. Harker on the Tanana River -- bar diggings that would pay about 12 dollars per day. There will probably be a rush to the new mines