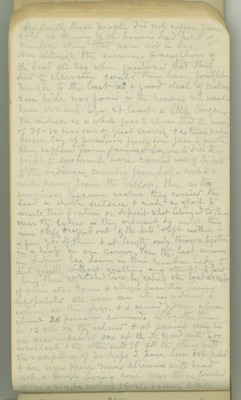 Evidently these people did not suffer from the cold, as many of the houses had piles of reindeer skins that were not in use. Nor, although the survivors had neighbors of the dead all say when questions that they died of starvation, could they have fought hunger to the last, as a good deal of walrus raw hide was found in the houses which would have sustained life at least a little longer. The evidence as a whole goes to show that the winter of ’79-80 was one of great scarcity, and as these natives never lay up provisions from one year to another they suffered from famine and began to die. The first to succumb were carried out of the huts to the ordinary cemetery from half a mile to a mile away from the village. Then as the survivors became weaker they carried the dead a shorter distance and made no effort to mark their positions or deposit what belonged to them near the bodies, as they ordinarily do, until they were only dragged out of the huts and left within a few yards of them, and at length only thrown together in a heap in one corner. Then the last survivors in despair lay down in their reindeer beds and died quietly without making an attempt to prolong their wretched lives by eating the last scraps of skin, etc. Some 6 villages have thus been depopulated, all save one which was reduced to eating all their dogs, and a second village where about 20 persons survived. Altogether there are about 12 villages on the island and at present only two are now inhabited, one at the N.W. end with 400 inhabitants, and the other with 15, all the others, with the exception of perhaps 2, have been depopulated and are now mere ruins strewn with dead, not a single living soul near them, touched now only by wolves and foxes and mice, while