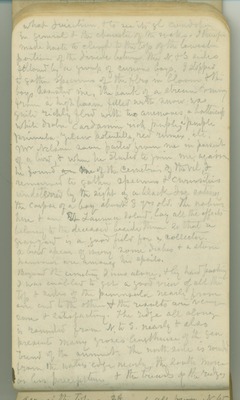 what direction, and to see its glacial condition in general and the character of the rocks. I therefore made haste to climb to the top of the lowest portion of the divide between the N and S. sides, followed by a group of curious boys. I stopped to gather specimens of the flowers in bloom, and the boys assisted me. The bank of a stream coming from a high basin filled with snow was quite richly flowered with two anemones, a buttercup, a white draba, cardamine – rich purple, a purple primula, a yellow potentilla, red rumex, etc. Mr. Nelson soon parted from me in pursuit of a bird, and when he started to join me again he found one of the cemetaries of the village and remained to gather specimens and curiosities, undeterred by the sight of a black dog eating the corpse of a boy about 8 yrs. old. The natives here and on St. Lawrence Island lay all the effects belonging to the deceased beside them so that a graveyard is a good field for a collector. A bird spear of ivory, some dishes, and a stone hammer are among his spoils. Beyond the cemetery I was alone, and by hard pushing I Was enabled to get a good view of all the top and sides of the peninsula nearly from one end fo the other, and the results are very sure and satisfactory. The ride all along is rounded from N. to S. nearly and also presents many grooves lengthwise of the gen[eral] trend of the summit. The north side is rounded from the water’s edge nearly, the south more or less precipitous and the trends of the ridges