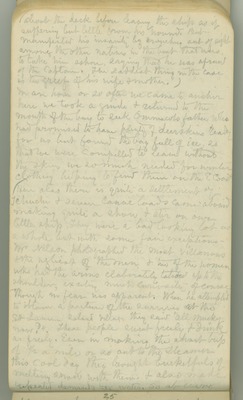 about the deck before leaving the ship, as if suffering but little from his wound, but manifested his insanity by crouching out of sight among the other natives in the boat that was to take him ashore, saying that he was afraid of the Captain. The saddest thing in the case of the grief of his wife and mother. In an hour or so after we came to anchor here we took a guide and returned to the mouth of the bay to seek Omniscot’s father, who had promised to have plenty of deerskins ready for us, but found the bay full of ice, so that we were compelled to leave without the skins we so much needed for winter clothing, hoping to find them on the E. Coast. Here also there is quite a settlement of Tchuchi and seven canoeloads came aboard, making quite a show and stir on our little ship. They were a bad-looking lot as a whole, but with some fair exceptions. Mr. Nelson photographed the most villainous and the ugliest of the men and two of the women who had the arms elaborately tattooed up to the shoulder, exciting much curiosity of course, though no fear was apparent. When he attempted to obtain a picture of the survivors at the St. Lawrence Island village they said “All mucky now?” These people sweat freely and drink as freely. Even in making the short trip of half a mile or so out to the steamer this cool day they brought bucketfuls of melting snow with them, and also made repeated demands for water, so at every