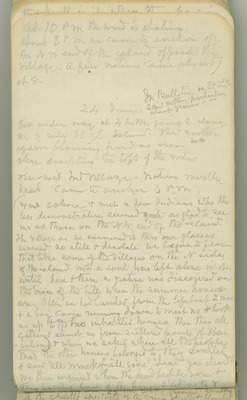 At 10 P.M. the wind is abating. About three in the afternoon we came to anchor off the N.W. end of the island opposite the village. A few natives came aboard at 8 o’clock. The next day we got under way at four in the morning going E. along the S. side St. L. Island. The norther again was blowing as hard as ever. We discovered Indian Eskimo village but the natives were mostly dead. Coming to anchor there at six in the morning, we went ashore and met a few Indians who, though less demonstrative, seemed quite as glad to see us as those on the N.W. end of the island. The village, as we examined it through our glasses, seemed so still and desolate, we began to fear that, like some of the villages on the N. side of the island, not a soul was left alive in it, until here and there a native was discovered on the brow of the hill where the summer houses are. After we had landed from the life-boat, two men and a boy came running down to meet us and took us up to the two inhabited houses. They all gathered about us from scattered points of observation, and when we asked where all the people were to whom the other houses belonged, they smiled and said, “all mucky,” “all gone.” “Dead?” “Yes dead!” We then inquired where the dead people were, and they pointed back of the houses and led us to 8