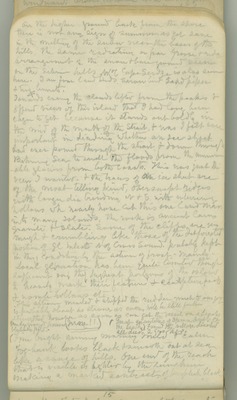 On the higher ground back from the shore there is not any sign of summer as yet, save in the melting of the snow near the bases of the hills. The same radiating, or part groove and ridge arrangement of the snow and bare ground seen on the Siberian hills W. of Cape Serdze is also seen here. Saw four land birds, snow-bird, sandpiper, and two linnets. Towards evening the clouds lifted from the peaks and offered views of this island that I had long been eager to get, because it stands out boldly in the mid[dle] of the mouth of the Strait, and was, I felt sure, important in deciding whether an ice-sheet had ever poured through the Strait and down through the Behring Sea to swell the floods from the innumerable glaciers from both coasts. This was just the view I wanted, and the traces of an ice-sheet are of the most telling kind, overswept ridges with longer dia. trending N and S., with intervening hollows which nearly have cut this one land mass into many islands. The rock is ancient lava, granite and slate. Some of the cliffs are very rough and crumbling like those of the deforested portion of glacial inlet N. of Cross Sound, probably kept in this condition by the action of frost mainly. Local glaciations has been quite limited, though sufficient on the highest portions of the island to heavily mark their features and sculpture peaks and womb hollows, etc. This afternoon mended and shipped the rudder, much to our joy. Is probably about as strong as ever. Will be still further strengthened, however, as soon as can get the vessel on beach. Great quantities of spruce drift on the beaches. Found the village deserted – all died 2 years ago. Underground houses, blubber pits. June 11. Fine bright sunny morning, mild and calm. Fog-bank looks black and smooth out at sea, like a range of hills. One end of the reach that is visible is lighted by the sunshine, making a marked contrast of purplish black