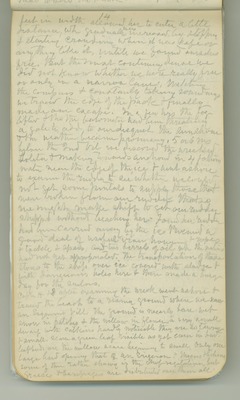 feet in width allowed her to enter a little distance, which gradually was increased by stopping and starting, crowding when it was safe or anything like it, until we found ourselves free. But the mist continuing dense we did not know whether we were really free or only in a narrow lane. Watching the compass and constantly taking soundings, we traced the edge of the pack and finally made our escape. In a few hours the fog lifted and though the barometer had been threatening a gale to add to our disquiet, the sun shone and the weather became promising. Five or 6 miles below the Indian Village we discovered the wrecked Loleta, and making towards [it] anchored in 4 fathoms of water near the edge of the ice, and went ashore to examine the rudder to see whether we could not get some pintles to supply those that were broken from our rudder, that so we might make shift to get our rudder shipped without beaching her. Found her rudder had been carried away by the ice. Procured a good deal of useful iron, however, and ropes and tackle and spars, and two barrels of oil which the natives had not yet appropriated. The transportation of these stores to the ship over ice, covered with sludge and full of dangerous holes, made a busy day for the sailors. Captain and I after examining the wreck went ashore and traced the beach to a rising ground where we saw an Eskimo village. The ground is nearly bare, wet snow in patches, and the willow in flower, a very small dwarf with catkins hardly noticeable they are so tawny and small. Scarce a green leaf visible as yet even in bud. Leafbuds on the willow scarce beginning to swell. Only one large bud opening --- that of an Erigeron. Mosses and lichens, some of them rather showy, [are] (is) the vegetation, but grasses and saxifrages are distributed over them all.