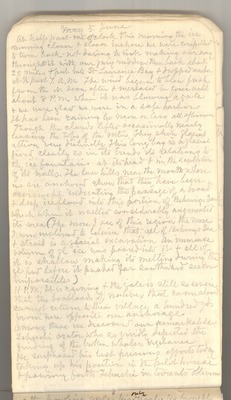 5 June. At half past one o’clock this morning the ice running closer and closer in shore we were compelled to turn back, not daring to risk making our way through it with our jury-rudder. Ran back about 25 miles and put into St. Lawrence Bay, and dropped anchor at half past 7 A.M. The wind began to blow fresh from the N. soon after, and increased in force until about 8 P.M., when it was blowing a gale and we were glad we were in a safe harbor. It has been raining too, more or less all afternoon, though the clouds lifted occasionally nearly leaving the tops of the mountains. They show glacial action very distinctly. This long bay is a glacial fiord, clearly so in its trends, its relations to the ice fountains at its head, and in the sculpture of its walls. The low hills near the mouth where we are anchored show that they have been overswept, indicating the passage of a broad and deep ice-flood into this portion of Behring Sea, which when it melted considerably augmented its area. (The more I see of this region the more I am inclined to believe that all of the Behring Sea and Strait is a glacial excavation. An immense volume of glacial ice was poured into it and all of it is shallow, making its melting during the glacial period before it pushed far southward seem impossible.) It is raining, and the gale is still so severe that the boatloads of natives that came aboard cannot return to their village a hundred yards from here opposite our anchorage. Among these we discovered our remarkable Tchuchi orator who so vividly depicted the finding of the broken whaler Vigilance. He surpassed his best previous efforts to-day, taking up his position in the pilot-house and pouring forth Tchuchi in torrents, oblivious