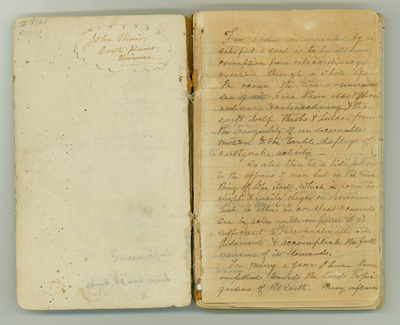 Few bodies are inhabited by so satisfied a soul as to be allowed exemption from extraordinary exertion through a whole life. The sea, the sky, the rivers have their ebbs and floods, and the earth itself throbs and pulses from calms to earthquake. So also there are tides and floods in the affairs of men, which in some are slight and may be kept within bounds, but in others they overmaster everything.

Few bodies are inhabited by so satisfied a soul as to be allowed exemption from extraordinary exertion through a whole life. The ocean - the rivers - universal sea of air have their ebbs & floods ordinary, & extraordinary. & the earth itself throbs & pulses from the tranquility of undiscernible [indiscernible] motion to the terrible displays of earthquake activity. So also there is a tide not only in the affairs of men but in the [primary] thing of life itself, which in some is slight & easily obeyed or overcome but in others is constant & cumulative in action untill in power it is sufficient to overmaster all impediments & accomplish the full measure of its demands. For many a year I have been impelled towards the Lord's tropic gardens of the South. Many influences