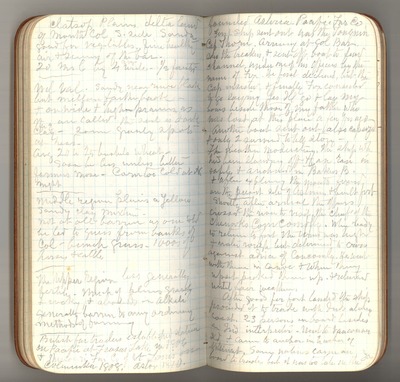 Clatsop Plains delta land of Mouth Col [Columbia] S. side. Sand good for vegetables, fine healthy air & [sunny] of the bar 20 ms [miles] long by 4 avg [average] wide—1/2 forested. Wil Val. [Willamette Valley] Sandy near river black but [mellow] farther back & on wide & higher prairies as they are called the soil is dark clay—some gravly [gravelly] spots at head. Avg 20 to 25 bushels wheat [soon] be [less] unless better farmers move—corn too cold at night. Middle region plains a Yellow sandy clay mixture not at all barren as one [would] be led to guess from banks of Col [Columbia] bunch grass 1000s of horses & cattle. The Upper Region less generally fertile. Much of [plains] gravely & rocky & abounds in alkali generally barren to any ordinary methods of farming. British fur traders established station on Pacific at Fraser Lake in 1806 & Missouri Fur Co. of St. Louis on Columbia 1808. Astor 1810.

founded Astoria Pacific Fur Co. First ship sent out was the Tonquin Cap. Thorn. [Armory] at Col [Columbia] Bar. [Saw] the breakers & sent off boat to find channel under one of his officers by the name of Fox. He first declined, but the cap [captain] insisted & finally Fox [conceded] to go saying Yes I’ll go & lay my bones beside those of my father who was lost at this place a few yrs ago. Another boat sent out also capsized & only 2 survived to tell story. The weather moderating. The ship wh [which] had been standing off [& on] ran in safely & anchored in Baker B [Bay] & after exploring the mouth [found] on the present site of Astoria & built fort. shortly after arrival the officers crossed the river to visit the chief of the Chinooks Comcomolly When ready to return to fort the wind was high & water rough but determined to cross against the advice of Comcomolly. He went with them in canoe & when they upset picked them up & returned until fair weather. After goods for fort landed the ship proceeded N to trade with Inds [Indians] along coast. 23 persons on board besides an Ind [Indian] interpreter. Went to Vancouver [ ] & came to anchor in [ ] of [Nillinat] Some natives came on board to trade but it was too late in the day.