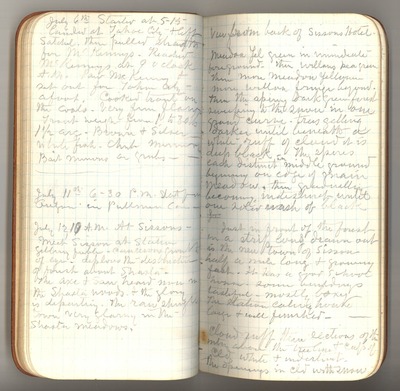 July 12 10 A.M. At Sissons. Meet Sisson at station. [getting] feeble – cancerous growth of eye. Deplores the destruction of forest about Shasta. The axe & saw heard more in the Shasta woods & the glory is departing. The raw [shingle] town very glaring in the Shasta meadows.

View from back of Sissons Hotel

Meadow Yel [yellow] green in immediate foreground. Then willows pea green then more meadow Yellow more willow fringe beyond. Then the [spirey] dark green forest sweeping to the snow in one grand curve – trees getting darker until beneath a white ruff of cloud it is deep black. The spires each distinct in middle ground beginning on edge of main meadow then gradually becoming indistinct until one solid wash of black.

Just in front of the forest in a strip long drawn out is the new town of Sisson half a mile long & growing fast. It has a good school house some buildings tasteful—mostly boxy. The station [eating] house large & well furnished.

Cloud ruff then sections of the mtn [mountain] above the tree line & cap of cld [cloud] white & indistinct. The openings in cld [cloud] with snow.