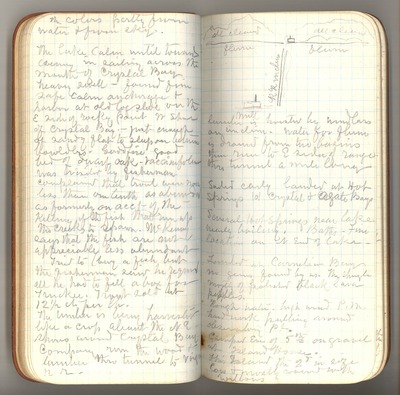 The colors partly from water & from sky.

The lake calm until towards evening in sailing across the mouth of Crystal Bay heavy swell—found fine safe calm anchorage & harbor at old log slide on the E side of rocky point S shore of Crystal Bay—just enough of sandy flat to sleep on between boulders—good fire good bed of dwarf oak—[ vacciniifolium] was visited by fisherman complained that trout were now less than one tenth as abundant as formerly on acct [account] of the killing of the fish that run up the creeks to spawn. [McKenny] says that the fish are [now] appreciably less abundant. Tried to buy a fish but the fisherman said he required all he had to fill a box for Truckee. Trout sold at 12 ½ ct per lb. The timber is being harvested like a crop about the NE shores around Crystal Bay. Company run the wood & lumber thru tunnel to [Voigt ] r r [railroad]

Lumber is hoisted by windlass on incline. water for flume is drawn from two basins then run to E. side of range thru tunnel a mile long.