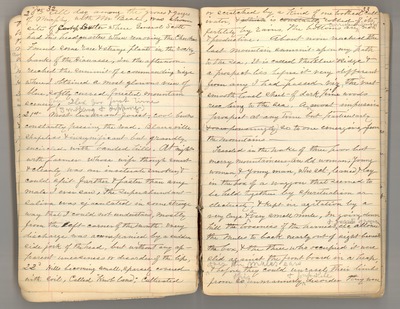 20th. All day among the groves and gorges of Murphy with Mr. Beal; was shown site of Camp Butler where General Scott had his headquarters when removing the Cherokees. Found some rare and strange plants in the rocky banks of the Hiawasse. In the afternoon reached the summit of a commanding ridge where I obtained a most glorious view of blue, softly curved, forested mountain scenery. Saw Ilex for first time. 21st. Most luxuriant forest, cool brooks constantly passing the road. Blairsville shapeless and insignificant, but grandly encircled with banded hills. At night with farmer whose wife though smart and cleanly was an inveterate smoker and could spit farther and faster than any male I ever saw. The superabundant saliva was ejaculated in some strange way that I could not understand, mostly from the left corner of the mouth. Every discharge was accompanied by a sudden side jerk of the head, but without any apparent uneasiness or disorder of the lips. 22nd. Hills becoming small, sparsely covered with soil. Called “Knob land”. Cultivated or scratched by a kind of one toothed cultivator, and is robbed of its fertility by rains. The bottoms are correspondingly rich and productive. About noon reached the last mountain summit upon my path to the sea. It is called the Blue Ridge and a prospect lies before it very different from any I had passed, viz. a vast smooth level sheet of dark pine woods reaching to the sea. An impressive prospect at any time, but particularly so to one emerging from the mountains. Traveled in the wake of three poor but merry mountaineers - an old woman, young woman, and young man, who sat, leaned, and lay in the box of a wagon that seemed to be held together by spiritualism or electricity, and kept in agitation by a very large and a very small mule. In going down hill the looseness of the harness and joints of wagon, etc. allowed the mules to back nearly out of sight beneath the box, and the three who occupied it were slid against the front board in a heap over the mules’ ears, and before they could unravel their limbs from this unmannerly and impolite disorder they were