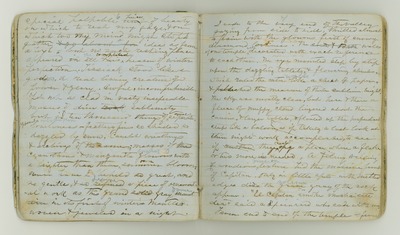 special palpable [unit] [ ] of beauty on which to rest my gaze, & on which too my mind might stop to gather [& go about for] ideas as from a text, but no such resting place appeared [in all this] [in] the completed heaven of winter perfection. Tissiack stood like a goddess, a real living creature of power & glory. Awful, incomprehensible, yet not as clad in [vastly] inseparable masses of dim [rock] sublimity but in ten thousand things of equal, separate, apparent, outspoken loveliness, feathery pines so shaded so dazzled by snow, Cavelet wreathings & archings of the same, masses of the ceanothus & manzanitas bushes glorious with a brighter than their own summer bloom; Never have I beheld so great, and so gentle, & so divine [refined] a piece of ornamental work as this grand [solid] gray dome [mountain] in its first of winter[s] mantle[s], woven & jeweled in a night.

7 I rode to the very end of the valley gazing from side to side, thrilled almost to pain with the glorious feast of snowy diamond lovliness. The [south & north] walls of our temple were decorated with exact reference to each other. The eye mounted step by step upon the dazzling tablets, & flowering shrubs which ruled the mtn [mountain] walls like a sheet of paper & published the measure of their sublime height. The sky was mostly clear, but here & there a fleece of [muffy] cloud lingered about the cañons, & larger tablets, floated up the perpendicular steep like a [balloon], as if taking a last look at their night’s work accomplished, to see if [another] they could spy a place where a flake or two more was[is] needed. A filmy veiling of wondrous fine in texture hid the massive front of Capitan. Only in little spurs with melted edges did the solemn grave gray of the rock appear. “El Capitan smokes mucha este dia” said a Spaniard who rode with me. From end to end of the temple—from