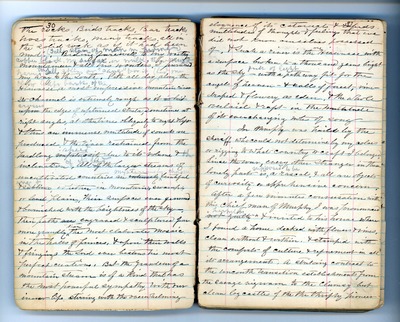 the rocks. Bird tracks, ‘bar’ tracks, ‘hoss’ tracks, men’s tracks, all in the solid rock as if it had been mud.” (Tell story of man in hiding.) Bidding farewell to my worthy mountaineer and all his wonders, I pursued my way to the south. Path all day led me along the leafy banks of the Hiawasse, a most impressive mountain river. Its channel is extremely rough, as it crosses the edges of upturned strata, sometimes at right angles, at other times obliquely to right and left, and thus an immense multitude of sounds are produced, and the river restrained from the headlong speed due to its volume and the inclination of its bed. All the larger streams of uncultivated countries are mysteriously charming and beautiful, whether in mountains, swamps or plains, their surfaces ever gemmed and burnished with the brightness of the sky, their paths engraved and sculptured far more grandly than the most elaborate mosaic in the halls of princes, and upon their walls and fringings the Lord ever bestows his most perfect creations. But the grandeur of a mountain stream is of a kind that has the most powerful sympathy with our inner life, stirring with the overwhelming eloquence of its cataracts and rapids multitudes of thoughts and feelings that we did not know ourselves possessed of; and such a river is the Hiawasse, with a surface broken to a thousand gems bright as the sky, full of light – with a pathway fit for the angels of heaven, and walls of forest, vine-draped and flowery as Eden, and the whole overlaid and wrapped in the multitude of its everchanging notes of song. In Murphy was hailed by the sheriff who could not determine by my colors or rigging to what country or craft I belonged. Since the war, every other stranger in these lonely parts is supposed to be a rascal, and all are objects of curiosity or apprehensive concern. After a few minutes’ conversation with this chief man of Murphy I was pronounced harmless and invited to his house, where I found a home decked with flowers and vines, clean without and within and stamped with the comforts of culture and refinement in all its arrangements, a striking contrast to the uncouth transition establishments from the savage wigwam to the clumsy but clean log castles of the thrifty pioneer.