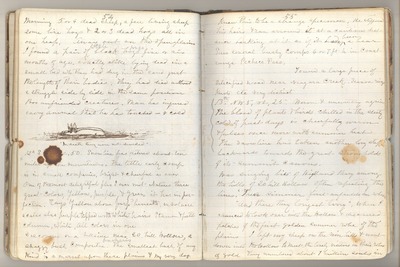 morning 5 or 6 dead sheep, a few living sheep, some live hogs and two or three dead hogs, all in one heap. Away out on the open plain I found a pair of little black pigs five or six months of age, exactly alike, lying dead in a small bed which they had dug in the sand just the length of their bodies. They had died without a struggle side by side in the same position. Poor unfriended creatures. Man has injured every animal that he has touched. V[ery]cold. [Drawing of pigs – “In death they were not divided”] 12th. S.E. 8 Clouds .50. Snow line has retired about ten miles up the mountains. The little early Comp. is in small companies, bright and cheerful as ever. One of the most delightful flowers I ever met. Nature’s three great colors, yellow, purple and green, it has in perfection. Rays yellow above purp[le] beneath, involucre scales also purple tipped with white hairs. Stamen and pistil column white. All colors in one. Discovered on a hillside near Twenty Hill Hollow, a shaggy bush Compositae bacharis. The smallest bush of any kind is a marvel upon these plains and my very dog knew this to be a strange specimen. He stiffened his hairs and ran around it at a cautious distance barking at it as if it had been a bear. Saw several bushy Comps. 6 or 7 ft. h[igh] in Coast range Pecheco Pass. Found a large piece of silicified wood near Niagara Creek. Season rings, knots, etc. very distinct. 13th. N.W. 5, clouds .25. Warm and unwintry again. The blood of plants and birds, chilled in the sleety cold of past days, is cheerfully warm and pulses once more with summer heat. The snow line has taken another long step backwards towards the great strongholds of its summit canyons. Was singing bits of Highland Mary among the hills of Twenty Hill Hollow, often repeating the lines, “There simmer first unfaulds her robes,” “And there they longest tarry,” when I chanced to look over into the Hollow and discovered patches of the first golden summer robe of the plains. I left my sheep on the rim hills and went down into the Hollow to meet the lovely visitors in their robes of gold. They numbered about 1 million souls in