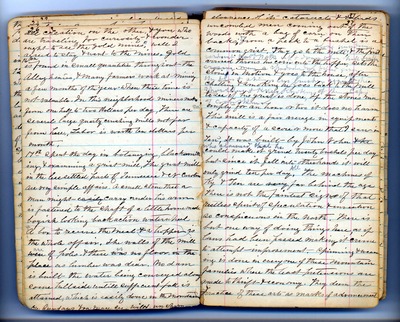 all creation on the other, and you who are traveling for curiosity and wonder ought to see the gold mine.” Well I agreed to stay and went to the mines. 16th. Gold is found in small quantities throughout the Alleghenies, and many farmers work at mining a few months of the year, when their time is not valuable. In this neighborhood miners make from one half to two dollars per day. There are several large quartz crushing mills not too far from here. Labor is worth ten dollars per month. 17th. Spent the day in botanizing, blacksmithing, and examining a grist mill. The grist mills in the less settled parts of Tennessee and N. Carolina are very simple affairs. A small stone that a man might carry under his arm is fastened to the shaft of a little, home-made, boyish looking, back action waterwheel. A hopper and a box to receive the meal is the whole affair. The walls of the mill are of poles, and there is no floor as lumber is dear. No dam is built, the water being conveyed along some hillside until sufficient falls is attained, which is easily done in the mountains. On Sundays you may see wild, unshorn, uncombed men coming out of the woods with a bag of corn on their backs. From a peck to a bushel is a common grist. They go to the mill along winding verdant footpaths up and down over hill and valley, crossing many a rhododendron-filled gorge, the flowers and shining leaves brushing against their shoulders and knees, knocking off their caps of coonskin, and the first arrived throws his corn into the hopper, sets the stone in motion and goes to the house. After chatting and smoking he goes back to the mill to see if his grist is done. If the stones run empty for an hour or two it does no harm. This mill is a fair average in equipment and capacity of a score or more that I saw in Tennessee. It was built by John Vohn who claimed that he could make it grind twenty bushels per day, but since it fell into other hands it will only grind ten per day. All the machines of Kentucky and Tennessee are far behind the age. There is not the faintest sign of that restless spirit of speculation and invention so conspicuous in the north. There is but one way of doing things here, as if laws had been passed making it crime to attempt improvement. Spinning and weaving are done in every one of these mountain families where the least pretensions are made to thrift and economy. They deem the practice of these arts as marks of advancement